Women Who Snore Have Differences In Symptoms, Risks

Men who snore (and those around them) often take it in stride. “It’s a guy thing” or “typical for men,” according to comments of both men and women. However, women who snore are more uneasy with the realization that they snore at all.

Snoring occurs from a narrowing of the upper airway. As tissues in the back of the throat relax during sleep, they can obstruct air flow. This can cause the tissues to “rattle”, which creates the snoring sound. 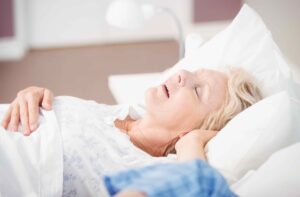 Although heavy snoring is often associated with men, research is delving deeper into the disparity of snoring males and females. They are finding that, in truth, the gap isn’t quite as large as perceived. It is suspected that women are less likely to admit they snore. Those who do often greatly underestimate how loudly they snore.

This may not be merely an issue of embarrassment for women. It’s been determined that women and men have different challenges when it comes to sleep disorders, and snoring in general. For instance, one researcher found that snoring women are more likely to complain of daytime fatigue or depression. Men have more obvious complaints, often having nighttime concerns such as waking up at night gasping or choking. This can lead to a large number of females being misdiagnosed.

Snoring can be a symptom of sleep apnea and loud snoring is one of the leading symptoms. Obstructive sleep apnea (OSA), which occurs from the tissue blockage, increases a person’s risk for serious conditions including heart disease and stroke. Although loud snoring is a typical precursor, neither is it a definitive path to sleep apnea.

To be clear, snoring doesn’t CAUSE sleep apnea. Sleep apnea is when an individual has short periods of time throughout the night in which they stop breathing. While up to 95 percent of people with sleep apnea snore, loud snoring isn’t always present. Consider that each apnea episode begins with air intake, followed by a lengthy period of silence. For some people, sleep apnea can be present even when snoring is not obvious or occurs at a very low level.

However, with loud snoring accounting for 95 percent of sleep apnea sufferers, loud and frequent snoring is certainly a warning sign of sleep apnea, for both sexes. Other telling symptoms include gasping, choking, snorting sounds during sleep; headaches, dry mouth, and sore throat in the morning; trouble concentrating during the day; and excessive daytime sleepiness.

It is becoming more apparent to researchers, however, that men and women differ in their symptoms. Although obesity, aging and being male are the main risk factors for sleep apnea, females commonly have symptoms that are mistakenly blamed on other conditions. These include weight gain, low energy, persistent fatigue, having the “blues”, and having moodiness.

One reason that the medical field is perking up to these issues of misdiagnosis are research involving 675 women and 1,238 men (average age of 49). Published in the Journal of Clinical Sleep Medicine, the nearly 2,000 participants completed a written questionnaire and underwent sleep studies (conducted in a sleep lab). The findings revealed that the female participants greatly miscalculated their sleep problems. Nearly 40 percent who claimed to be non-snorers turned out to snore severely or very severe in intensity.

This study also showed the intensity of snoring did not vary between genders. They found the number of women who underreport their snoring and underestimate the loudness was significant. Although 28 percent of women said they didn’t snore at all, this turned out to be true for just 9 percent.

What is especially concerning in this is that females are reporting snoring less often and describing it as milder than is the case. This means that doctors are less apt to send their affected patients for a sleep study for a definitive diagnosis. Because of this, the results suggest that doctors can misdiagnose common sleep apnea symptoms because they see no reason to look for other signs of sleep apnea.

Unfortunately, the stereotypes of the typical snorer is one of overweight, middle-aged men (not of the average female). Certainly, both men and women who are overweight or obese have a greater risk for sleep apnea in addition to smoking and age. Yet, an added risk factor for females when it comes to sleep apnea arises as she enters menopause.

By the age of menopause, 20 percent or more of women are more likely to develop sleep apnea. Estimates suggest that, as women age and enter menopause, the gap between men and women who suffer with sleep apnea narrows significantly – to an almost even percentage.

Menopause is such a factor because the estrogen and progesterone hormones of pre-menopausal females tends to protect women’s sleep and breathing during. As menopause depletes these hormones, the risk for sleep-disordered breathing increases.

Regardless of gender, it is important to know that insufficient oxygen due to sleep apnea starves the brain and strains the heart. Studies have shown an association between sleep apnea and stroke, heart attacks, type 2 diabetes, depression, obesity and a shortened lifespan.

If you suspect you snore or have sleep apnea, the good news – if you act while still mild to moderate – is there may be a simple solution. With your care in the hands of a skilled, experienced neuromuscular dentist, a small, custom-designed oral appliance worn during sleep may help you avoid the awkwardness and frustrations associated with a CPAP device.

CPAP (continuous positive airway pressure) is a mask worn over the mouth and nose during sleep. A hose extends from the mask, which is attached to a fan that forces air through the tube and into the throat. Although effective, there are many complaints from those who have been prescribed with CPAP devices. Embarrassment, being noisy, feeling claustrophobic, unable to move around in bed and inconvenience are just a few. To no surprise, compliance in wearing a CPAP each night is not good.

We are committed to helping patients who snore and/or have mild to moderate sleep apnea overcome these problems in a way that is comfortable, yet effective. Using highly-advanced imaging technology, our Shelby Two dental office is able to determine the precise points of airway interference. Through this information, we custom-design small, oral appliances that are worn comfortably during sleep.

Our process helps to eliminate the trial-&-error that some dentists offer, many of which are cookie-cutter in design and may not be effective for some patients. Allow us to explain our unique diagnostic and treatment process that can restore your quality of sleep in an affordable, easy-to-use manner. Call 586-739-2155 to learn more, or tap here to arrange a free consultation.

You may also wish to take a brief sleep questionnaire, which is at: https://www.banrbarbatdds.com/sleep-questionaire/