While research has linked oral health to many diseases and conditions in the body, the psoriasis-gum disease connection seems to be one garnering much attention from researchers. And, rightly so. A growing list of other diseases, such as heart disease, arthritis, and some cancers have shown correlations to the bacteria in the mouth, particularly that of periodontal (gum) disease. 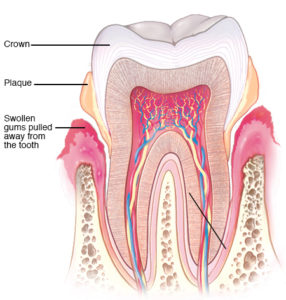 Psoriasis is a chronic disease that affects the skin. Its cause isn’t fully understood, but seems to relate to the immune system turning on itself. This condition causes the life cycle of skin cells to accelerate beyond normal. Cells build up rapidly on the skin’s surface, forming scales and red patches that are often itchy and sometimes painful.

Some preliminary studies have shown connections between psoriasis and gum disease. For example, a 2013 study found that while “people with psoriatic arthritis had about the same rate of gum disease as those without joint inflammation, people with psoriatic arthritis were more likely to have severe gum problems.” (https://www.psoriasis.org/advance/prevention-tips-for-uveitis-stroke-and-gum-disease)

Other studies have shown that people with periodontitis (advanced gum disease) are nearly 1.5 times more likely to develop psoriasis than people with healthy gums. So, could one trigger the other, and vice versa?

Periodontitis is a serious gum infection that damages the soft tissue and destroys the bone that supports your teeth. This occurs when toxins produced by the bacteria in plaque irritate the gums.

These toxins activate a chronic inflammatory response in which the body, which turns on itself. This systemic inflammation leads to break down and destruction of tissues and bone that support the teeth.

Gingivitis is the initial stage of periodontal disease. This may have mild symptoms or even some deemed “normal.” These include areas where the gums are tender or seeing blood in the sink when brushing teeth. However, gingivitis, if not halted, can soon progress to periodontal disease.

Gum disease symptoms include:
• Red or swollen gums
• Gums that bleed when flossing or brushing
• Persistent bad breath
• Gums that loosen from teeth (or “recede”)
• Teeth that may loosen or drift

After performing thorough oral exams on participants (including digital imaging), researchers found that periodontitis was significantly more common in people with psoriasis than in people without the skin condition. The results showed that 24 percent of the psoriasis patients had moderate or severe gum disease, while only 10 percent of those in the control group did.

Adjustments were made for factors that could lead to gum disease, such as smoking and infrequency of dental visits. Even so, the finding clearly indicated that people with psoriasis were significantly more likely to suffer from bone loss.

Because many patients develop psoriasis before gum disease, psoriasis could also increase their risk for gum disease. This should be an added incentive for people with psoriasis to maintain excellent oral health and have an involved relationship with their dentist. And, reinforce the need for a healthy mouth to all people as an important part of having good overall health.

If you have signs or symptoms associated with gum disease (as listed above) or have not had regular dental check-ups, call 586-739-2155 or tap here to begin with a no-cost consultation appointment in our Shelby Township dental office. Together, we’ll discuss your needs and goals in a private consultation room.