Stop Smoking & Save Your Smile!

Although it’s a little early to be thinking about resolutions for the new year, we wanted to add to your incentive in case one of yours could be to “kick the habit.” 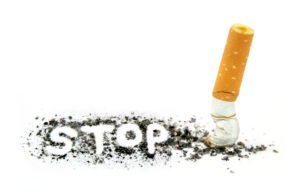 According to a December 2017 article in CNN, giving up smoking is one of the top ten resolutions made each year, yet seems to be one of the least likely to achieve.

A study released by the United Kingdom’s Royal Society of Public Health showed that 3 in 5 people in the who resolved to quit for January 1 end up resuming the habit within the end of January.

The study included 2,000 people surveyed in the U.K. on their resolutions at the end of 2016. Of the 2,000, 8 percent had resolved to quit smoking. By the end of January, a whopping 59 percent had given up on their new year’s commitment. By the end of the year, only 13 percent were still on goal. (https://www.cnn.com/2017/01/04/health/new-years-resolution-quitting-smoking/index.html).

We certainly don’t want to single out smokers when it comes to new year’s resolution success. Losing weight, getting fit, and saving more money are all common and admirable goals. In addition to the challenges of kicking the habit, the survey also found that losing weight was the second least successful of common resolutions. They found that 65 percent of dieters lasted only a month and just 16 percent were able to hang in there to the end of the year.

As a dentist, smoking is a particular concern for reasons you may not be aware. Although many smokers are familiar with the higher risks this habit poses for cancer and other diseases, smoking is terribly harmful to your smile. Read on to learn more about the sequence of devastation that smoking can trigger.

Smokers have a greater risk of periodontal (gum) disease. The drying effect that smoking has on the soft tissues in the mouth create an ideal breeding ground for oral bacteria. As oral bacteria reproduce and amass in the mouth, gum tissues become inflamed. This is the beginning of gum disease.

Gum disease is the nation’s leading cause of adult tooth loss. Losing teeth is detrimental to your overall health and is NOT a normal part of the aging process. Studies have shown that people who wear dentures die an average of ten years earlier than those who keep their natural teeth.

The report included a dental specialist’s warning that, “Concern about biofilms on dentures is growing as researchers continue to identify links between oral bacteria and heart disease, chronic obstructive pulmonary disease or COPD, and respiratory diseases, including aspiration pneumonia.”

Many smokers are aware that they have bad breath more often, discolored teeth, and slower healing after procedures such as extractions, gum treatment and oral surgery.  During dental cleanings, their hygienist may have told them that smoking causes greater buildup of plaque. This is why gums are so tender; the hygienist is having to scrape plaque and calculus (which is hardened plaque, also known as tartar) from teeth around tender, inflamed tissues. (Just a reminder from our Hygienists: Dental cleanings are comfortable when you have healthy, pink gums!)

Some things smokers may already know, when it comes to overall health, include:
• Smokers have a decreased life expectancy of an average of 10–15 years compared to non-smokers.
• Smoking is linked to nearly a third of all cancer diseases and deaths.
• Pregnant women who smoke have a higher risk for first-trimester spontaneous abortion, preterm births, low birth weight babies and sudden infant death syndrome (SIDS).
• Women who smoke are at risk for early menopause while men who smoke are more at risk for impotency.
• People who breathe in your “second hand” smoke (what you exhale) are subjected to over 50 known carcinogens and other harmful chemicals.

For those who are able to give up smoking, the effort is worth it! The positive effects can be felt almost immediately. In about 48 hours, damaged nerve endings begin to restore. The sense of smell and taste begin to return to normal.

“Quitters” also notice their breathing is easier in about 3 days and they have fuller air intake. Oral health improves within 2 weeks as blood circulation in the gums and teeth returns to nearly that of non-smokers. Heart attack risk also declines with blood flow greatly improving. Activities are easier and the constant smokers cough is gone.

In our office, the goal for every patient is to help each achieve optimal oral health and a smile he or she is proud to share. For those who smoke, we make individualized recommendations so the potential for achieving this is favorable. For those who are trying to quit, please share your journey with us so we can support you wherever possible. We know the odds are challenging, yet do-able to beat!

For excellent support in kicking the habit – for good! – check out: http://smokefree.gov/